Nope, this post isn’t about guns. Not even close. Sorry to disappoint you if that’s what you came here looking for, but I would love for you to stay and read.

I watched a movie the other night that caused me to write a post yesterday. The movie had to do with a father-son relationship. It triggered something in me that was bound to come. Two weeks from today will mark the one year anniversary of my father’s death. And so, as I began to pour my heart out onto a screen, as I watched the white space be filled with black letters, I should have realized that the trigger had been pulled and that from here on out, at least for the next few weeks, EVERYTHING will be a trigger to make me think of my dad.

The other night, I was at a choir rehearsal and we were going through a hymn book for an upcoming hymn sing that we are having. As I called out the numbers of the hymns we were singing, I came to hymn number 444…..and I began to laugh.

You see, I grew up going to two worship services on Sunday, one in the morning and one in the evening. The evening service was much more relaxed and casual. The order was more freeform and flexible with much less of a liturgy than its morning counterpart. My father, the pastor, would lead the singing in the beginning and would ask for requests. He had a very quirky sense of humor, so he would oftentimes go off on a silly tangent that most people didn’t think was very funny……at least I didn’t, but that might not count since most kids think their dads are dorks anyway.

But as I called out the number……444……it made me laugh, because it made me think of him, of my dad. It made me think of how he would have said it. He would have rolled the number over in his mouth a few times, letting it fall out in a silly and awkward way. 444….spoken with his Brooklyn, New York accent, a big smile on his face, beaming from ear to ear with pride that he had found humor in a simple number.

And there in front of nearly 30 people, I felt myself nervously laughing if for no other reason than to keep myself from crying. I could hear his voice, not audibly and out loud, but in my head. I could see his face. I could just sense the warmth of his personality. And it succeeded at equally causing a smile and breaking my heart simultaneously.

As April 17th approaches, there will be more triggers, more reminders, things that bring me back to my dad. I need to write about them, I need to share them, because, in a way, when I share them, I share him. Far from perfect yet perfect enough for me, I miss him every day, and I look forward to seeing him again. 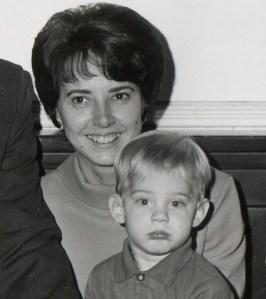 Tuesday, July 19th, 2011 is a day that I will hardly forget.  It was just 5 days after my mother left the hospital for the last time with the news that she only had about a month to live.  From a month to 5 days, it’s kind of hard to believe.

There’s no easy way to tell someone that kind of news.  I remember early on in my mom’s journey through cancer, she was afraid.  In fact, it was the week after she had been diagnosed.  We were driving to yet another doctor’s appointment in the back of my aunt and uncle’s van and I was holding her hand.  She did not want to be a “wimp,” she told me.  Having seen her live through so much in her lifetime, I would hardly ever choose such a word to ever describe my mother, but that was her fear as we held hands and the tears streamed down her face.

I wondered, as she journeyed through the process, how much she was doing for herself and how much she was doing for everyone else.  My mother’s greatest strength was also her greatest weakness, she lived her life for her family and was selfless to a fault.  There was a part of me that felt that she just didn’t want to fight the cancer, but she did.  Not even capable of imagining what she was going through, I did my best to put myself and my desires aside and embrace her wishes.

Things ended much differently than we imagined they would.  We thought that there would be an operation, but through treatment, the cancer spread.  We thought that she would have longer time, but she had been so weakened by the treatments that her body could hardly find the strength to push through.

In the end, I think her will won out.  The human will is a very fascinating thing.  Through it, nearly impossible odds can be conquered.  Determination and will can drive a person.  I know my mom’s faith drove both her will and determination, she trusted that God was in control….we all did and still do.  It’s just difficult to trust while in the midst of the storm.

Her will won out because she waited until her best friend from high school got there to say good-bye and waited until one of the teachers who she had worked with arrived with her newborn baby before she finally breathed her last.

It was 6:30PM in the evening and I remember it like it was yesterday.  We knew that the time would be short.  My dad, still in shock over the course of events, had spent some time alone in the room with my mom.  My brother and I were taking turns reading Scripture verses to her.  As her breathing became more and more labored, I struggled to come to grips with reality myself.

Those last moments were among the most difficult.  As my mom’s breath grew more and more shallow, I remember how I began to watch the pulse on her neck to know exactly when she had passed.  That last pulse is embedded on my brain in a way that I will never forget it.  Even after she was gone, my dad struggled with the reality of turning off the oxygen machine since she didn’t need it anymore.  That marked one of the most painful moments of the day to me, a husband coming to grips with the loss of his beloved wife.

Yes, I can recall the events of the day with some vividness.  It’s hard to believe that it’s been 2 years already.  2 years full of more hardship.  My dad is gone.  I’ve had my own share of health issues.  I finished seminary.  My first and only daughter was born.  So much has happened.

I fully believe that you never quite recover from a deep loss, you simply learn to live with it.  I feel that way about my mom.  She was one of my best friends and it’s hard to fill that void.  My heart aches every day, but my kids are a reminder to me of who she was.  They remind me of the selfless love that she showed to me and everyone around her.  They remind me that there is still hope and that there is still life.

I fully expect that even after 10 years, I will still feel as if it was just yesterday that she was here.  I’m okay with that.  I will not stop telling stories.  I will not stop passing on what she taught me to my kids.  I will not stop shedding tears when they come.  I miss her, but I look forward to seeing her again.  It’s been 2 hard years, but one day, there will be no years between us…..ever again.

Providing my two cents for anyone who cares.

Thoughts from a young husband, father, and pastor

Naked Christian
It Was On My Mind

The greatest blog about faith , music, journalism --- and other things ---- in all the land!

Letters to Grandma
Count it all joy

Reports from my somewhat unusual life

a blog for those seeking personal change for God's glory

Gospel-Centered Resources For The Gospel-Driven Life

Jordan and Eddie (The Movie Guys)

You are a good mom. Now feel like one too.

What you all think but what I am free to say

(n): An office or position that provides its occupant with an outstanding opportunity to speak out on any issue.